The Average Game of Balcony

Balcony is one of the most common maps to see at high levels of play. Some players love it, some hate it. I am not here to write about how much I like or dislike Balcony, but rather to discuss some core strategy regarding the map that I have been using a lot lately, and feel like other high-level players are using as well. 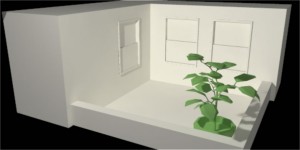 I’ve begun to, after about five thousand games of Balcony (link accessible for SpyParty beta users only), form what I call The Average Game of Balcony. I say “form” because this is, at the moment, a theory. And before I continue, I want to note that this will not win you every game of Balcony; it’ll only work a certain amount of the time, and there are plenty of counters to it. But, on average, this should work more often than not. And when it works, it should work quite convincingly once you have the core ideas well formed and are ready to look out for them. It is also assumed that the game-mode is Any 2/3, with Purloin the Guest List and Fingerprint Ambassador turned off, as that is by far the most commonly played game-mode for Balcony.

First lets get a few things out of the way: Many players don’t want to play a fancy game of SpyParty, they aren’t interested in getting a lowlight for their sweet pathing, they just want to win that specific game and move on to the next one. This theory preys on that mindset, and can be particularly brutal if they keep at it. Most players will switch it up if you keep winning on a given map, so this will not work 100% of the time, but if it does keep working I’d suggest you send them here.

That said, there are four major steps in The Average Game of Balcony that will always take place. They are, in no specific order:

“Drawn,” you might be asking yourself, “that’s really obvious! How can that help anyone get better at sniping on Balcony?” Well the basic answer is that there are telltale signs of characters who only do these specific actions, and people who do not. Let’s start by looking at common actions of the Spies who play The Average Game of Balcony. I can’t tell you exactly how I would take advantage of any of this knowledge, as I want you to learn, adapt, and play however you want to. All I want to do is give a gentle nudge in what I believe to be the proper direction and see where it takes other players.

Spies only talk when they absolutely have to

Spies will ignore their turn to talk in Conversation Circles quite commonly, and they especially do not talk constantly unless they need to (which is basically never). They do need to talk, however, to flirt, and to Contact the Double Agent on a White Action Test, which averages to every 45 or so seconds. How you deal with this is entirely up to you, but in The Average Game of Balcony this is very easy for Spies to do, but there are definitely ways to punish more relaxed players who don’t bother with watching when they need to talk (although be careful for false-positives with no talks in the Conversation Circle).

Spies tend to stay in the same spot for as long as they possibly can, rarely, if ever, moving. They also don’t like to attempt hard or interesting pathing choices, although this probably already nets most people reading this some Lowlights. Although there is no clear-cut way to watch for people not moving, there are ways to deal with those who consistently hang about in the Conversation Circle and never walk around the actual map. One example of this is to simply Lowlight people who briefcase during chaotic times, although do remember that players with adequate experience can emulate this, which then makes it an Un-Average Game of Balcony so the advice here becomes obsolete.

Spies do not wait when they have the win in reach, with rare exception. Many fear their Seduction Target or Double Agent leaving the Conversation Circle so they do their Action Test as soon as possible. You can watch for flirts at certain timings (first 15 seconds, around 1:10-0:55 mark, and 0:20-0:00 respectively), especially if no real movement happens, and eventually catch the Spy flirting at the proper time.  Characters who do not talk ~45 seconds after their previous one are unlikely to be our Spy, and if they are the Spy odds are that you are not playing The Average Game of Balcony. I would also like to remind our Sniper friends to use Overtime to their advantage when possible, because that can 100% confirm a shot or let the Spy lose due to Timeout, something a shot at 0:05 can’t do.

I would say these are the defining characteristics of Spies that play The Average Game of Balcony. But I want to stress that I am not making fun of or belittling Spies who play this way. In fact, this whole theory works on the premise that most games of Balcony function in a very similar, almost mechanical, manner. So don’t feel bad if you win using The Average Game of Balcony while Spying: It’s a solid game plan, and because it’s a solid game plan it’s used often, which is why I can devise an entire theory (this one, that you’re currently reading!) to deal with it.

Before moving onto the Spy side of things, I want to address the one mission I have barely touched on this entire article: Bug the Ambassador. Watching for Bugs is a huge deal on Balcony, and if you can’t guard Bug you may want to be careful using The Average Game of Balcony as a strategy guide, because when you lose to a Bug it feels pretty awful. My best advice on watching for Bugs is fairly simple, watch for the arm and the lean. You can find more info in this video.

Onto how to counter Sniper’s using The Average Game of Balcony as a guideline for Sniping on the map: Throw curveballs at them. Make their Lights useless by acting useless, talk a ton, move around a lot, or attempt Bugs while they are trying to watch the party. It actually isn’t that hard, although watch out for Snipers who can watch for The Average Game of Balcony and the other, weirder games of Balcony all at once, as those Snipers are way scarier than anyone just using this as a guide.

As a final note, I want to remind players that this is not the only way to look at Balcony. Don’t feel like you need to bother changing your playstyle if it has worked perfectly fine for you in the past. Do not forget that this is a rough guideline for what to look for and how to play against and with The Average Game of Balcony. I left a few things out of how I would do things with this information intentionally, hoping other players will learn the vital information and come to their own conclusions as opposed to copying and pasting a “How to Win at Balcony” strategy guide, if anything of the sort could even exist.

That should be about all I need to cover for this particular topic, but if you feel I missed something, or maybe you disagree with the article, feel free to let me know via twitter, a PM in the forums, ask about it on my ask.fm, mention it while I am streaming, or in the comments section down below. Thanks for reading!