My wife and I arrive in Seattle on August 27th, the night before PAX begins. A handful of other players have arrived already, and a couple others will arrive a few hours after. It’s been a long day (travel is stressful, and flying is particularly so), but we’ve arrived safe and sound and we’ve magically gained an extra three hours for our trouble to spend on the town. We arrive at the hotel and before we get to the door, I get a call from virifaux, who has the single most games of any SpyParty player: “I just saw you walk by,” he says. Sixty seconds later, 56,000 games spread out over four people come walking out the front door to greet us.

We all say hello and talk so animatedly (and un-Spylike, it has to be said) in the hotel lobby that the manager asks us to keep it down, which is our cue to venture out into the city in search of food. After a lot of walking and talking for its own sake, we settle on the Hard Rock Cafe on Pike Street. We eat much, stay long, and talk loudly. That last thing will turn out to be a mistake.

Chris Hecker is the sole developer of SpyParty, and he’s exactly what I expected. Our introduction is a perfect microcosm of everything I know about him: it’s friendly, familiar, and fast, and within a minute and a half of meeting him in front of the Washington State Convention Center, we’re already upstairs walking onto the exhibition floor as he waves a fistful of badges in front of a guard.

You learn a lot on your first day volunteering at the SpyParty booth, most of which seems obvious in retrospect. You learn that you’re further removed from your beginnings than you thought, and that you have to forget a lot of what you know in order to intelligibly explain how it works to new players. You also learn that cough drops are worth their weight in gold. Five or six hours into the first day, most of us sound like Kermit the Frog choking on a fly. I tell Hecker I feel dumb for not bringing any. “How do you think I feel?” he replies. “I didn’t think to bring any and I’ve been doing this four years.” Maybe this year’s volunteers are just more talkative. 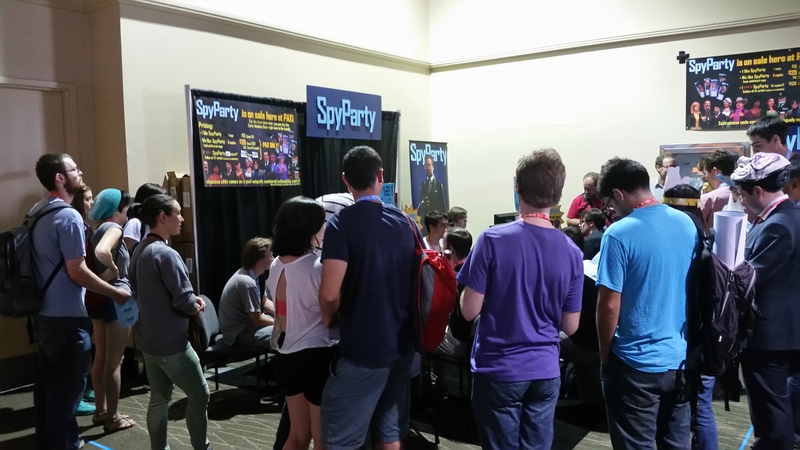 Midway through the day, Hecker tells us about a SpyParty board game prototype being developed by Tim Fowers, which he’d like us to play test for him. We do, and it’s not only a good game, but it somehow manages to feel like SpyParty. It generates the same kinds of emotions and exercises the same neurons. We’re still throwing out suggestions and ideas as the game is being packed up. 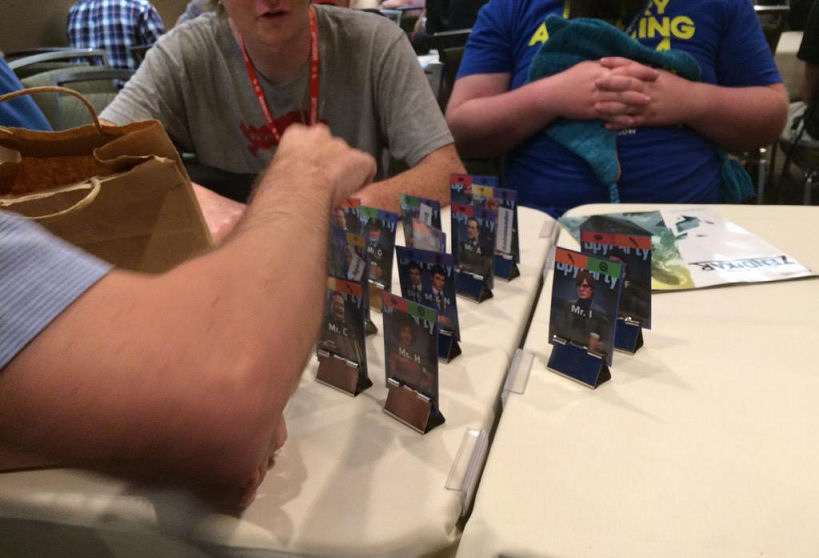 This time, Hecker brings a couple of bags of Halls (which will be supplemented by a bag of Ricola with FAMILY PACK emblazoned on it by the third day), and we go through them like M&Ms. Nearly every time somebody goes into the corner of the booth to grab one, they grab a few extras to stuff in their pockets and offer each of the volunteers one, just in case they’re running low. The cough drops accomplish their ostensible goal: our throats don’t hurt! Unfortunately, they can’t circumvent our physical limitations: by the end of the day, every twelfth word simply refuses to come out, making in-person conversations sound like a Skype call on a sketchy connection.

Just a few hours into the day my tutoring routine has improved considerably. The most common questions have been preemptively incorporated into the spiel, and only a few people have been confused by the notoriously complicated microfilm mission. But the mental grind is starting to catch up to the physical; most of us have our tutorial patter down cold, so the routine has become a little rote. We keep sane by sitting across from each other while our tutored players play, with the tutor on the Sniper side trying to see how quickly they can spot the new Spy. This has to be done in a way that won’t give the game away to the new Sniper, if they happen to see it. We end up resorting to veiled hand signals, which is probably not a coincidence given the state of our collective larynges.

kcmmmmm gets credit for both creating and perfecting this mini game. His greatest charade is miming a person holding up a banner to indicate Alice, the character based on game artist John Cimino’s girlfriend, who’s standing about 15 feet away doing exactly that. Here’s a picture of her cosplaying as the character, though whether you can cosplay as yourself creates a logical mobius strip beyond my ability to comprehend:

Increasingly tired and having gotten caught in a torrential downpour the night before (Seattle apparently over correcting for the atypically clear 2.5 days we enjoyed after arriving), I nevertheless come in early to meet krazycaley for a chance to play Keep Talking and Nobody Explodes before the general public swarms the floor and snakes the line. It’s a tremendous game—like SpyParty, very high concept—and we do well, but we forget to put our names (and some reference to SpyParty) on the leaderboard, a mortal sin that Hecker will razz us about for the rest of the convention. Every little bit helps.

Everyone tells me that Saturday is the craziest day, and things will probably be a little slower. Everyone is wrong; things are roughly as busy as they were on Day 2. The line does have a nice natural equilibrium, though: when it’s longer, it wraps around the two open sides of the area and makes it harder for people to see when walking by. When it’s shorter, it’s easier to see, and in turn attracts more onlookers. The result is that the line never gets too huge, and rarely stays too small. And it just keeps coming.

The grind is made easier by little islands of amusement and encouragement. There’s a moment during each explanation of the game’s concept where you can see the genius of it register, and the look on people’s faces when it does is almost addictive. At one point I explain the game to a young woman, and just as I say “…and the Sniper has only one bullet,” her eyes go wide and her mouth drops open, and my brain releases enough dopamine to propel me through the next hour. Later, I tutor a young boy who picks the game up preternaturally. I wonder how long it might be before he’s mopping the floor of the online lobby with most of us. Right now, natural skill takes a backseat to experience and effort, but if the game grows enough in popularity, the top players will increasingly be people who possess an innate talent for it. Maybe the ones I taught will go easy on me.

The last day is bittersweet: four days is just long enough to create that “I was just getting the hang of this!” feel right before it all ends. Everyone’s in good spirits, though: virtually all of us feel that the newbie play was much better than expected, which we decide to take as evidence of our explanatory skills.

Halfway through the day I bite down on one of the aforementioned cough drops—it’s hard not to do while talking—and either chip a part of my tooth or lose a filling (I’m still not entirely sure which). When I tell Hecker and Caley they seem alarmed, but thankfully it doesn’t hurt, which allows me to look tougher than I am by only missing a few minutes of tutoring time. Hecker tells me not to tongue at it, though this is as futile as me telling him not to Purloin.

When the final day ends, the convention’s “Enforcers” sweep through the hall and politely boot anyone without an Exhibitor badge. When they’re done, a voice comes over the loudspeaker: “PAX 2015 is now over!” A cry goes up from everyone on the floor. SpyParty‘s contribution to the sound is minimal, both because of our size and our shredded tracheas, but it’s there. We begin the process of packing up the booth’s materials, which Chris, John, and Alice do with learned efficiency. The whole thing folds up into just a few bags and half a dozen flat panel TV boxes. I think to myself that it’s an appropriate metaphor for the entire game that so much can come from so little.

We walk back to the hotel as a group (sans krazycaley, who had an early flight) and meet up with our non-Exhibitor-badged brethren. I remind everyone that zerotka, one of the first SpyParty players, requested that we take a group selfie. We squeeze 82,000 games, eight people, and three nationalities into one fuzzy photo. Wildly different people, drawn to the same place for a few days because we share this one thing in common. 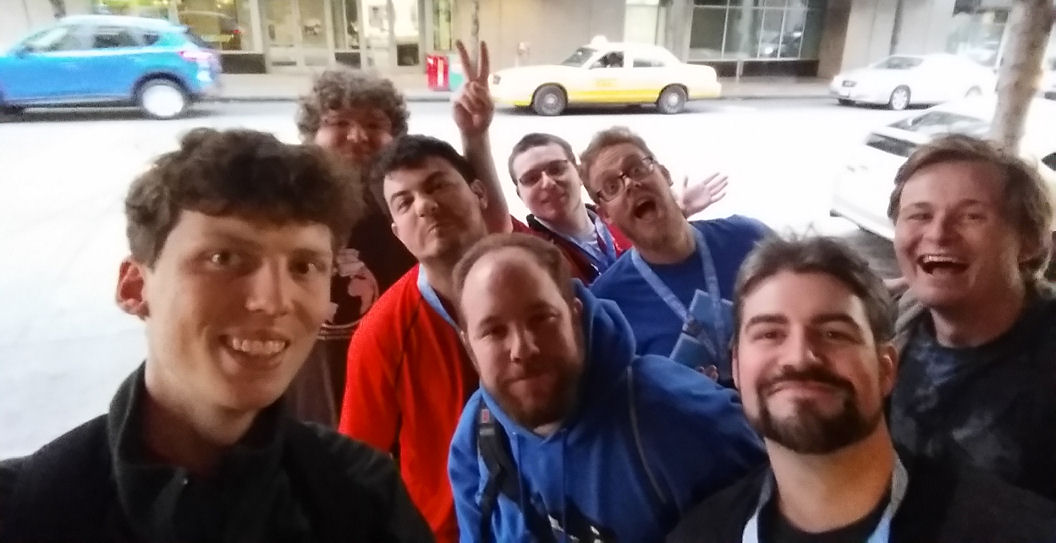