The rousing success of the Animal Welfare Charity Streamathon means that the community unlocked (instantly, and live on stream!) all three new site features available on Saturday. Here’s a quick rundown of what we’ve added:

Thanks to wobble, we can now see a top-down, in-browser, animated visual representation of each game called Party Surveillance. 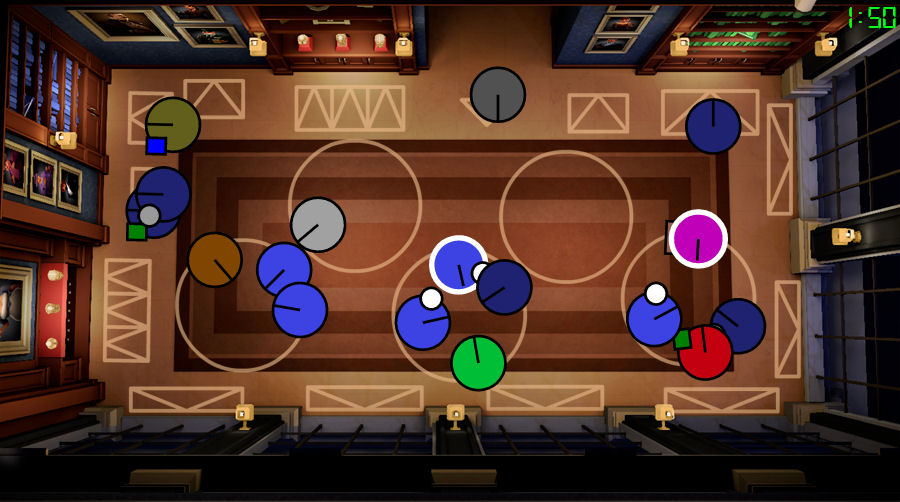 END_OF_DOCUMENT_TOKEN_TO_BE_REPLACED

The first ever Tournament of Position kicks off this week. Players from divisions as high as Gold will face off with standout players from Silver and below, the latter vying for the possibility of significant promotion. 16 total competitors are taking part in the four-round swiss tournament, seeded first by division, then by standings. The 1st place finishers in Bronze and Copper (Sheph and Max Edward Snax) elected to take the auto promotion to the next division up instead of competing in the ToP; players replacing them are marked with asterisks in the list of pairings below:

END_OF_DOCUMENT_TOKEN_TO_BE_REPLACED

posted on April 12, 2018 by WarningTrack Leave a comment
Uncategorized

Burning Out, But Refusing to Fade Away

I’ve been addicted to SpyParty for over four years.

I tend to throw myself into whatever game I’m playing, forgetting to pace myself. I burn out on most of them, and move on to a new game. And I’m worried that is happening with SpyParty. This is a pretty normal cycle for me when it comes to playing video games. The unusual part is, with SpyParty, I don’t want to burn out.

I think of my time with SpyParty as consisting of four phases: Sprinting, Jogging, Stumbling, and Crawling.

On April 17th, 2012, I was lucky enough to become one of the first internet strangers to play SpyParty. And boy did I play. This was the sprinting: every day after work I would jump into the lobby and wait for someone to join. But as is the case with every other game I’ve played, I wasn’t satisfied just by playing it. I wanted to delve into the mechanics of the game, and with SpyParty that meant studying the AI.

Studying the AI wasn’t easy back then: we didn’t have replays, guides, or even veteran players. Everything was fresh. Everything still had to be discovered, learned, and shared. So I got to it.

END_OF_DOCUMENT_TOKEN_TO_BE_REPLACED

Community Building on “The AfterParty”

SpyParty’s sharper, apart from drawing up lots of cool art for people’s streams and tournaments, also does a semi-regular podcast called “The AfterParty” (which needs to exist if only for the name). He just posted an episode where he and I discuss how successfully communities are built, a topic with particular relevance to SpyParty. Enjoy:

The Elite Want To Lose

posted on October 3, 2014 by WarningTrack Leave a comment
Reprinted from the blog of Brian Reddington, with permission.

It’s the seemly solid motto of Drawnonward, SpyParty’s most experienced player. At a whopping 15,000 games and 500+ hours of gametime, he is perhaps the best at the game. His nightly streams give you a great glimpse into how he thinks, plays and acts.

But the greatest part is that motto… is his losing motto. It encapsulates the entire spirit of the “elite” of SpyParty: They want to lose.

SpyParty has no tutorial, so it’s currently packed with an extensive readme and information pamphlet that’s almost flat out required to read to play the game. It’s a complex set of rules and suggestions, and that’s only for the first 50 games. After that, you’ll start getting into learning about the final frontier of the game — the dreaded human.

This is where the Elite shine. Humans may seem random, but deal with them enough, and you’ll see patterns. Some are common (pathing!) and some are not so common (more pathing!), some are easy to see (animation cutting) and some are not so easy (stalk flirting), and some is just downright silly (dancing!)

The Elite know them through and through. Things you may not even be aware were mistakes will reward you with a present going faster than the speed of sound. Even smaller mistakes will get you highlighted or draw attention to yourself.

Then you lose. Then they tell you what you did wrong. Then, hopefully, you’ll win.

It’s perhaps the strangest thing. There are no secrets in SpyParty. Even if a bug crops up during a beta update that makes it easy to find out who is the human, it’ll be patched the next day thanks to a user submitted bug report. Personal or “working” strategies will usually be explained one on one after a match, but the more common ones will can be found in videos, podcasts, and so much more.

Why do the Elite want to lose? Perhaps they’re crazy in some way (500+ hours I mean how insane do you need to be?) Perhaps they want to see the world burn? Perhaps… they just want to play the game?

SpyParty works best when the two players are of equal skill. You can’t expect anything out of them. They know what you know, and you know what they know, so what you know they’ll know to try won’t know, so you’ll know to know to look out for things that they don’t know… or something like that. Perhaps what the Elite want most is to return to that “randomness” that all players start out in. They want to lose so it’s so much more fulfilling when they win.

The Ladder: Climbing Up and Onward?

The SpyParty Ladder, administrated by KrazyCaley, has really influenced how SpyParty has grown and developed recently. I understand that as a smaller community, it makes sense that a centralized, continuous tournament of sorts can be a large draw to many players, especially higher level players who primarily want to test their skills against similarly skilled opponents. That is exactly why I joined the ladder initially, or more accurately the tournament that would seed the initial placings into what would become the Ladder.

For a time I was really content with the Ladder, just happy with how it worked and what it was doing for the community. I mean, look at all of this new activity and excitement! All these sweet replays, and suddenly a real competitive amphitheater to legitimately put ourselves to the test! And I would like to note that, for this exact reason, the Ladder is very good at its intended purpose, which I would define as ~ To provide a stable and reliable competitively minded place with which to test one’s skill at the game of SpyParty.

Now the specifics of why I decided to step down from the Ladder are unimportant for this piece of writing, but what is important is the things I’ve started to notice that are seemingly a result of the Ladder.