The big charity streamathon is close (two days: Saturday, May 8th!), so here’s a quick rundown of the planned schedule, as well as the specific charities donations will be going to (with reasoning for each). We’ll also be personally matching every dollar. Please do stop in, either to help support a great cause or just to hang around, chat, and amplify the fun. All happening at twitch.tv/spypartyfans. UPDATE: the entire 10.5 hour stream is now available on Twitch! 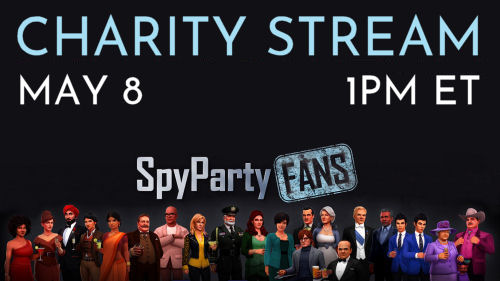 END_OF_DOCUMENT_TOKEN_TO_BE_REPLACED

posted on April 7, 2021 by WarningTrack 3 Comments

In one month (Saturday, May 8th), we’ll be hosting a SpyParty Charity Streamathon to benefit animal welfare! It’ll start at 1:00 PM ET and probably go all day.

END_OF_DOCUMENT_TOKEN_TO_BE_REPLACED

Casting has always been a big part of the SpyParty scene, particularly from 2018 onward when the game became available on Steam just as SCL Season 4 began. From those matches and other tournaments the same year, the community produced over 100 hours of competitive SpyParty content. In 2019 we roughly doubled it, and added another 150 hours (plus countless casual competitive streams) in 2020. Add it all up and you’ve quite an archive, so we decided to do something with it:

Introducing 24/007, a Twitch channel that continually streams competitive SpyParty matches. The channel, which picks the next VOD randomly, is launching with over 400 videos and about two weeks of run time. Most VODs have had their host and casters logged, along with a related match page so you can easily download the associated replays. END_OF_DOCUMENT_TOKEN_TO_BE_REPLACED

This video is a big thank you to the community volunteers who ran this cast all season long. They’ve been extremely generous with their time and, as you can see, with their enthusiasm. It’s been a joy casting with you all, so I gave you the collective honor of counting us in to some of the funniest and most exciting moments of SCL Season 4. Thank you!

It’s been over a year since I posted this message and took a leave of absence from the SpyParty community. Now, I find myself drawn back to both the game and its still-welcoming community. Some things are different. Some things aren’t.

I think I’m in a unique position to comment on the evolution of the community, for a few reasons. Without trying to sound pretentious (as if I need to try to sound pretentious), I started playing around the same time as many great, highly influential players: virifaux, KCMmmmm, zeroTKA, and slappydavis to name a few. And the community was small enough that I was streaming earlier and more often than anyone, which gave me more influence on the game and the community than I had expected (KrazyCaley first found the game watching my streams, and lthummus was introduced to higher level strategy through them). I was privileged to host many players regularly who are now among the best in the world, like bloom and canadianbacon. All of this was by accident: I thought streaming would be fun, and no one was doing it, so I did it.

These are the kinds of things I find myself thinking about more after taking some time off. I find myself asking: what’s different? What isn’t? What’d I miss?

The most significant change is probably the introduction of the SCL (SpyParty Competitive League). It’s the most sustained and successful attempt thus far at formalizing competitive play. The increase of activity in the lobby is noticeable, and anecdotally it seems like new players are climbing the skill curve faster than ever. It remains under-promoted in formal channels, however, and it’s fair to say the streams, while greatly improved over season one, are still finding their footing.

We’ve had a large influx of players, which has been fantastic. Seeing all these newer players getting really into the game, being driven with such a sense of competition and community has been glorious to watch. Even in the short time that I’ve been back and interacted with these people, they remind me of why I enjoy our community so much, as well as being people I am looking at to be the next big ambassadors of the game – Sure, we have our virifauxs and zeroTKAs who’ve been here forever, but we can’t rely on a handful of passionate players; we need an army of passionate players to spread the word, or else we’re leaving the future of our beloved game to chance. The role the speedrunning community has played (a few prominent speedrunners have found the game through KrazyCaley) as of late cannot be overstated.

The way people talk about the game is different, thanks to the SCL. When I took a break a year ago, many players were commenting that there wasn’t a lot to do after reaching a certain point in the skill curve. The positive side effect of this was that most of the games were casual and fun. The downside is that there weren’t as many being played. Today, it’s the opposite: we’re missing those fun, casual games, but we have lots of more serious matches. Trying to have both may be impossible, but at minimum we can look at the upsides and downsides of both. The upside of the SCL, in addition to the increased activity mentioned earlier, is a corresponding uptick in high-level strategy discussion and analysis. It’s also led to a highly encouraging increase in the number of third-party tools, from lthummus’ SpyParty Draft Tool, to sgnurf’s SCL match database. SpyParty‘s community has always been filled with independent, self-starting, technically-inclined people, so none of this comes as a surprise, but even so, this group has risen to the occasions to fill these needs.

The downsides, apart from pulling the game into a more competitive, high-stress format, is that it standardizes certain game modes through its mere existence. This is probably inevitable, and probably worth it, but it’s part of the trade off.

The game still isn’t on Steam, still doesn’t have a new UI, and we still don’t have dossiers or recommendations. The first item might be more understandable than the last, because it’s a one-time event from which there’s no going back. And obviously, the new UI has to precede the Steam launch. For better or worse, the state of the game and the community when it launches on Steam is going to have an outsized impact on how it’s perceived going forward. If it seems like I’m being pedantic in talking about the lack of casual games, that’s why: this is one of the biggest inflection points for the mood and tenor of the community.

While we’ve definitely seen a swelling in ranks, the number of regular posts on the forums seems to have not changed at all. I know what you want to say: “What about the Competitions Subforum, Drawn?” It’s true, the SCL itself has led to a lot of forum activity, but it’s segregated: the Competitions subforum feels much like the old Zendo thread that got to over 100 pages; it’s interesting to people involved and mostly ignored by everyone else. Either you’re interacting with it, or you’re not: there is no middle ground. There’s a big, glowing line between those who participate in the SCL, and those who don’t.

I think this is an area where the community has been, unfortunately, pretty stagnant. KrazyCaley and elvisnake are the only regular streamers that come to mind. Beyond them, they happen here and there. I had hoped that, when I stopped streaming regularly, someone (or even several people) would fill that gap, but I’ll be the first to admit it’s difficult to find a stable time to stream day in and day out. It’s even harder when you’re playing what’s still a niche game.

Overall, I’m still happy with the state of the SpyParty house. It is, after all, still standing, and most of the rooms look better than when I left it. The structure is still pretty much the same, and that’s largely a good thing. But it’s just about time to hold the big Open House that is Steam. It’s time to show the rest of the world what this game is about.

If you have any comments, whether regarding how poor my writing style is, or perhaps on why you agree with me so much (

Thanks for reading,
-Drawn

SpyParty Talk Show: Pub and the State of the Game

The inimitable drawnonward hosted a panel of SpyParty players last night to discuss the new Pub map, as well as the state of the game and its general trajectory. Guests include myself (warningtrack), slappydavis, wodar, and canadianbacon, who was apparently holed up during a helicoptered mountie raid. In addition to serious talk, there was much amusement and general goofing off. Here’s the VOD, broken into two parts: